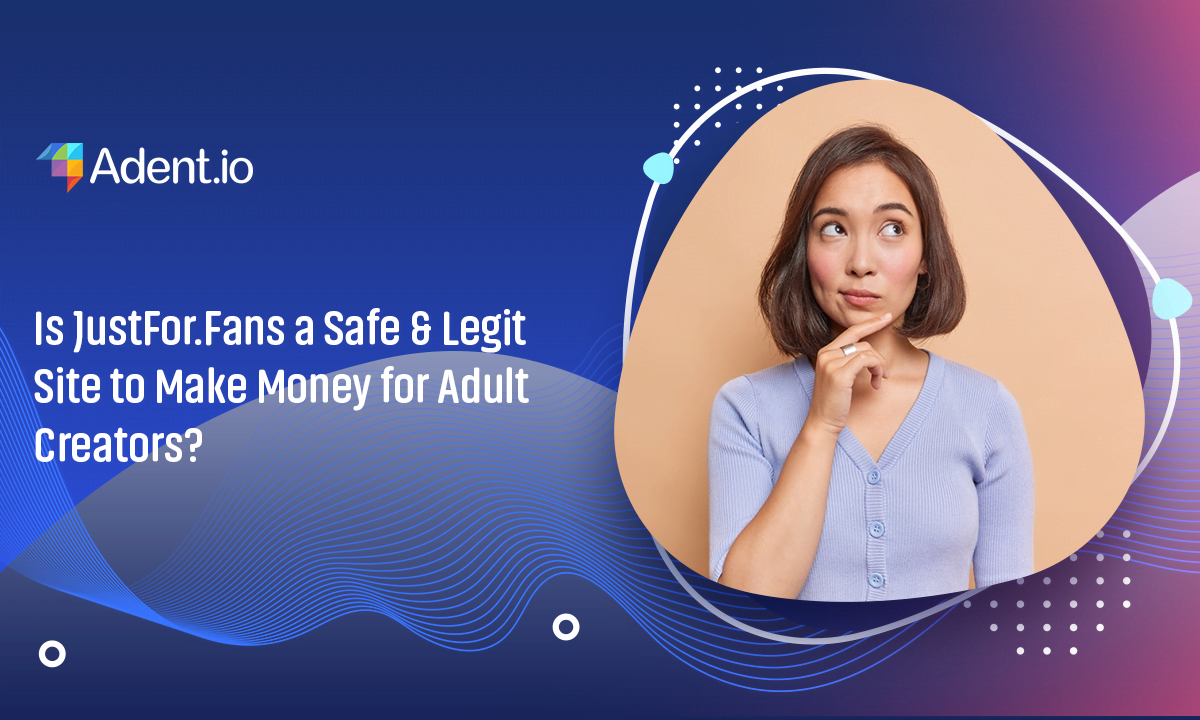 JustFor.Fans! The platform has got quite a name to it, right? It’s easy to remember and gains immediate attention. Well, that’s just our thoughts!

The social subscription trend (especially the adult niche) has been on the rise since the pandemic hit. And now, platforms like Fansly, OnlyFans and JustFor.Fans are overwhelmed with adult creators.

In this article, we’ve explained everything you need to know about JustFor.Fans with safety & legitimacy as the main theme. Let’s quickly cover the basics and then move on.

An Overview of JustFor.Fans and How It Works

JustFor.Fans, commonly known as JFF is an exclusive adult subscription platform that was founded in the year 2018. The platform receives more than 3.5 million monthly traffic and like other popular adult platforms, JustFor.Fans allows creators to post adult content and make money from it.

There’s a reason why we say JFF is exclusive. JustFor.Fans allows banned niches like incest roleplay, water sports, asphyxiation and more. This gives a lot of options to adult creators, especially to those who want to try out the kinky niches. Also, JustFor.Fans is a platform that welcomes all types of creators – gay, LGBTQ, straight women and more.

Here’s the best part about JFF. The platform was founded by Dominic Ford, a former sex worker. He started the platform to help adult creators earn money easily by engaging with the audience in a better way and provide a holistic adult platform experience to fans & creators.

That’s the overview. Now to how JFF works.

The Working Model of JustFor.Fans

The platform’s working model is similar to that of platforms like OnlyFans and ManyVids except that JustFor.Fans is easier to use. Fans have access to a feed that displays the content of all their creators on it. From there, they can further engage with their favorite creator. As for creators, one can simply upload photos, videos and start monetizing their content.

The signup process on the platform is quite simple. You need to sign up with your Twitter account and show some ID to verify that you are 18+ (US residents need to have a signed W-9 form). The verification from the side of JustFor.Fans take somewhere around 30 minutes and after that, you’re all set to use the platform.

Though it’s a bit odd that you have to use your Twitter account to signup as a performer, it all adds to the safety of the platform – the number of fake performers will be cut down to a great extent.

Understanding how the platform works isn’t a big deal. You have to consistently engage on the platform by uploading videos & photos and slowly grow your follower base. And then you can start making money on the platform with the various monetization methods.

Speaking of the monetization methods, that’s what we’ll be looking at next.

The platform has so many monetization methods making it one of the best and direct alternatives to OnlyFans, Fansly, ManyVids and more. Below mentioned are how you can make money on JustFor.Fans.

Subscription Membership for Fans: This is one of the top monetization ways on JustFor.Fans. On JFF, you can create subscription plans ranging from $4.99 to $14.99 for your fans and give access to your daily content.

Earn Extra by Selling PPV Content: Apart from subscriptions, you can make extra money by selling your fans exclusive media. They have to pay an additional fee to access this content.

Sexting: You can have a 1-on-1 steamy chat with your fans and earn from the same, popularly called sexting.

Live Web Cam Earnings: On JustForFans, you can appear solo or as a couple to your audience. Monetization here would be via subscription or fee per minute.

Merchandise Selling: Yes. Like OnlyFans, on JustFor.Fans, you can sell your personal merchandise and make money from them. This could be anything – used bras & panties, sell nude pics, polaroids, etc.

Custom Content Option: Fans can place a request to the creators asking for content with specific requirements. Here, you can keep a custom price on the content.

Fans can also purchase access to IG or Snapchat access of creators to stay connected and have a look into their personal lives. There are also customer tips that can give you some good revenue. So, those are the methods via which you can make money on JustFor.Fans.

Now about how you get paid!

As for the payout methods, you can get your money via bank transfer (Australia, the US, UK, the EU and Mexico), Paxum, or Cryptocurrency.

The minimum payout threshold is $20 now (reduced from $50) and you can either choose from weekly or monthly payouts.

So far, to this point, we’ve seen about JustFor.Fans, how it works, its monetization ways and payment methods. Now, to the most waited for part – the safety and legitimacy of the platform.

JustFor.Fans was founded by Dominic Ford, a former male sex worker who started it for all the good reasons! The platform supports all kinds of creators, offers multiple monetization methods, glitch-free payouts and even has a great support team (which we’ll be talking about later).

Also, JustForFans has raised more than $120,000 for good causes – Black Lives Matter, Trans Lifeline, The HIV League, Point of Pride and more. You can also donate a percentage of your revenue to up to three charities on the platform.

So, there’s no reason why one should think that JustFor.Fans is not legit!

Is JustFor.Fans Safe to Use for Adult Creators?

There, down to the final question you wanted to know – Is JustFor.Fans safe to use? The answer would be a big yes! But you don’t have to take our word for it. We’ve come up with a couple of reasons that tell you why JustFor.Fans is one of the safest adult creator platforms.

This is one of the things that makes JustFor.Fans stand out! They have a sex worker protection program that helps marginalized creators on the platform. Also, creators can get much-needed mental support from within the platform itself.

There’s great customer offered which is reassuring. Though the platform does not have a knowledge base sort of stuff, the customer support tells everything you need to know within 30 minutes most of the time. You can contact them via Twitter or from the website.

JustFor.Fans has done a great job with dealing with fraud & privacy. In fact, JFF is the best when it comes to this part.

If you come across your videos on an external site, you can report them here – https://justfor.fans/login.php. JustFor.Fans will make sure that this is dealt with. Also, JFF will watermark your content with the name of the fan that shares it, making it easy for you to find out who has shared your content.

So, those are some of the features that make JustFor.Fans a safe adult creator platform.

JustFor.Fans Review and a Final Note

To put it in a phrase, JustFor.Fans is one of the best adult creator platforms. It is legit, safe, supports exclusive categories and offers multiple monetization methods.

Since JFF is coming from a former sex worker who wants to make the industry better, you can expect the platform to grow while providing a safe space for monetization.

And yes. Here’s something we thought you’d love to hear. With so many adult creator platforms on the rise, this is the best time to create your own marketplace. You can create your own OnlyFans or JustForFans like an adult marketplace and manage thousands of models using adult multi-model white label scripts like xFans. Or if you simply want to create a separate website for yourself and monetize your content with your fans, you can go for fan membership white label scripts like xModel.

Like we already said, the adult industry is at its peak and we see no reason why you should not start your own venture!

Coming back, your question about JustForFans has been answered! All that’s left is for you to signup for JustFor.Fans and start making some money!💰